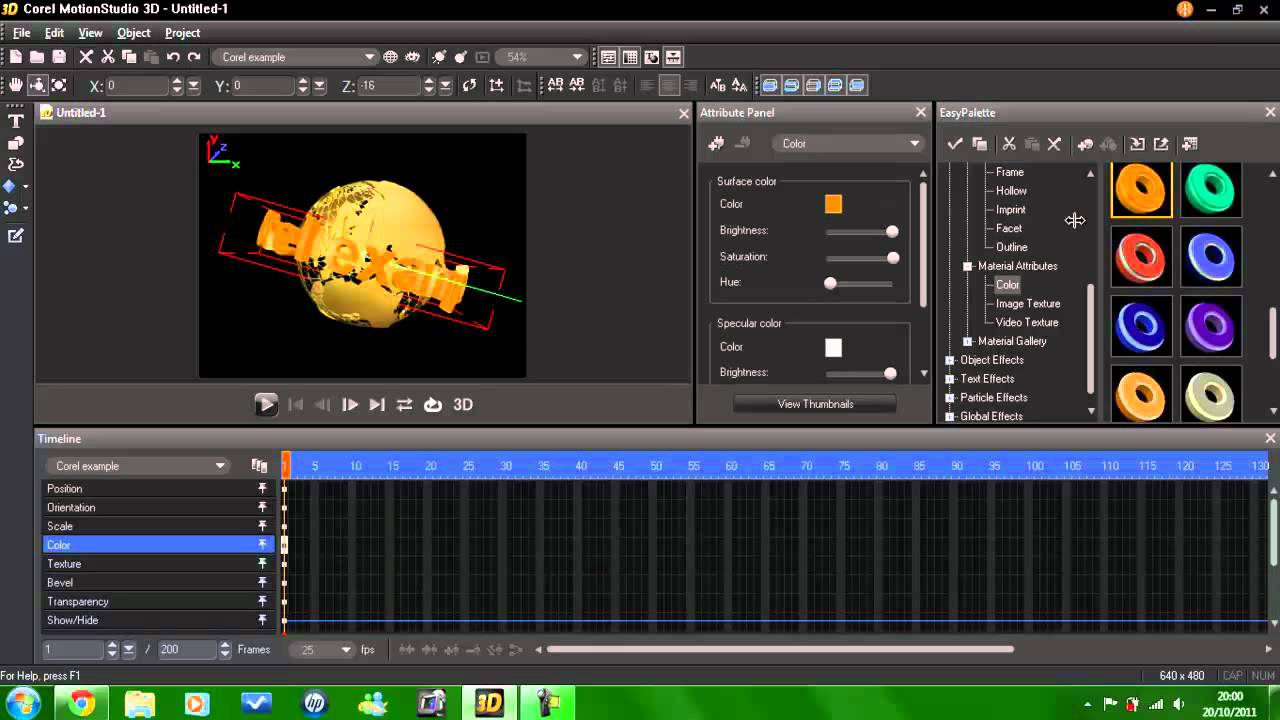 And this version beefs up its performance with native bit support. The version of Corel's VideoStudio does so admirably, as one of the few consumer video editing programs that can work with degree VR footage. It's also well equipped with multicam editing, multipoint motion tracking, time-remapping, video masking, audio ducking, and 4K support. New tools include 3D titles, fisheye lens correction, a dedicated pan and zoom module, and more.

Corel VideoStudio Ultimate is an impressive product with a clear, simple interface, and it's loaded with fun features, making it a PCMag Editors' Choice for enthusiast video editing. What's New in Corel VideoStudio Ultimate We've been reviewing VideoStudio for over a decade now, and it's been a favorite of ours for the past few years. It's an easy-to-use but powerful tool for consumer-level video editing that contains much more than just the new features, as you'll see throughout the rest of this article below this list.

All the standard timeline, transitions, sound editing are present. Corel also produces Pinnacle Studio, which targets a more pro-level audience of users. If you've been following VideoStudio over the years and are familiar with its capabilities, here's a quick rundown on what's new for the version. If you're new to the software, our full, in-depth review starts in the Pricing and Setting Up section, further down.

Some of the changes are cosmetic, like a darker background and flatter icon designs. Some of the updates change program functionality, such as adding the ability to crop and resize right in the preview window. Others include the ability to set cue points in the timeline and guides to help aligning objects. Lens Correction Tools.

This one is of particular interest to users of GoPros and other action cams, letting them correct fisheye distortion. Users of Final Cut Pro X have had this for a while, but it's still impressive that a more consumer-oriented product like VideoStudio gives you a selection of titles you can rotate on three axes. New Picture-in-Picture Tools. Corel calls these "split screen" tools, but they're actually the same as what CyberLink calls video collages and most apps call picture-in-picture effects.

They're found inside the Instant Movie tool, which I'll discuss later. More degree Support. The program can now import footage from all popular degree video cameras, according to Corel, and now supports dual fisheye, single fisheye, and equirectangular content.

There's also a degree preview player to view your video before exporting to popular media sites, including Facebook, YouTube, and Vimeo Pan and Zoom Controls. A new view lets you customize these popular treatments, accessible from a toolbar button.

Stop Motion. This groundbreaking tool in VideoStudio now supports Nikon as well as Canon cameras for importing still images. The product is available at two levels: The latter is reviewed here. By comparison, CyberLink PowerDirector Ultimate doesn't limit the number of multicam tracks even in its lower-cost version, but only lets you edit four at a time. View All 11 Photos in Gallery To get the VideoStudio software online, you download an app that in turn downloads and installs the not-small 1.

Maybe that's not such a big deal in these days of massive storage. You'll still need a pretty big hard disk if you want to do hi-res video editing, especially for work in 4K which even the current iPhone models can shoot. Interface The latest release of VideoStudio starts by updating the Welcome view, represented by the house icon.

This is equivalent to the eLive tab in Premiere Elements, but I wish it included options to resume projects or start new ones, the way Photoshop CC does. On VideoStudio's Welcome page you can find inspiration and instruction in the form of tutorials, videos, and templates.

The Get More section offers extra-cost templates, filters, transitions, and overlays. There's some great material in here for the video hobbyist. The other three modes—Capture, Edit, and Share—are where you do the real video work. This adds up to a handy interface that guides you through the workflow process of adding, editing, and outputting your digital movie.

The Editing mode's pleasing now even darker-blue-gray interface uses the familiar three-pane view with source and effects and video preview each occupying half the top portion of the window and the timeline taking the whole bottom portion. Clear buttons on the right side of the content window give access to often-needed tools, such as transitions, titles, and effects.

I like the way icons in the source panel make it easy to show and hide video, photo, and audio content types. VideoStudio lets you resize and move the interface panels, and you can even pull them out into separate windows.

You can also choose which buttons appear on the toolbar above the timeline including buttons for the new Pan and Zoom and 3D Title Editor and set three custom interface layouts and easily switch among them. And now you can take advantage of multiple screens to see your video full-screen on one and all your editing tools on the other, for example. All this means VideoStudio rates as one of the most flexible UIs in the space.

New tools in the preview window give easy access to cropping, scaling, and moving your video content around in the frame. Also new are guide lines for centering and aligning overlays and text. You can now adjust a track's transparency from a button in the track head area. That joins a new Track Muting button and Ripple Editing button.

Finally, you can now resize the timeline tracks themselves, simply by dragging the lower edge in the header down or up. While most other video editing programs display a dialog box at this point to help you choose your project settings, with VideoStudio you're just immediately thrown into adding content and building a timeline without any guidance popping up.

I'd love to see choices about my new project's format, or an option to use FastFlick or Instant Project, the app's simplified editors. The Capture mode which you enter by clicking the large Capture button at the top lets you record from a connected camera, scan a DV source, and import from Digital Media or a mobile device. Getting media into VideoStudio is simple, but, once it's there, the app offers no tagging or search capability such as you get with Adobe Premiere Elements.

This can make finding a clip troublesome at times, as can the interface's lack of a search box for clips or effects. You can, however, sort source content by name, type, or date. I like how the buttons make it easy to view just video clips, just photos, just music, or any combination of those categories you like.

Back in the main editor, you simply drag and drop a clip from your source tray to add it to your timeline. If you double-click on a clip in the source tray, it opens in the Single Clip Trim window. This provides a handy way to set the start and finish markers of the section of the clip that you want to add, with precision to the individual frame level. You only get a maximum of 20 overlay tracks, where competitors like PowerDirector offer or more, but few hobbyists will find that to be a major stumbling block.

The Multitrim Video tool lets you set multiple in and out points, so you don't have to create a lot of separate clips if you just want to remove some dead space in the middle of a clip. It also lets you detect ads in TV content. PowerDirector matches this multitrim capability, but most other editors lack it. The Corel trim tools offer easy, clear navigation, including a jog wheel and zoomable selection scrubber. That's far more than you get with Sony Movie Studio Platinum.

A new capability on the timeline is the ability to group and ungroup clips. Moving or trimming a grouped set of clips keeps them together, so you don't have to realign everything after making an adjustment.

Instant Movies Corel VideoStudio offers not one but two tools for simplifying movie creation: FastFlick, which is a separate included application, and Instant Project.

You can get to the latter by clicking the button with the magic wand icon in Edit mode, right below the Media button. This is simply template-based movie creation, with templates for your movie's beginning, middle, and end. You can also create your own user-defined templates. You double-click a template, and it fills the timeline with placeholder clips, transitions, and a background music sound track. It's not as helpful as Adobe Premiere Element's templates, which give you a storyboard of what types of shots work in each placeholder.

New for templating are the aforementioned Split Screen templates, which appear in the top of Instant Project. Drag one onto the timeline, and again you'll see placeholders for picture-in-picture clips. You need to hold down the Ctrl key while dragging a clip into a placeholder, which is less intuitive than simply dragging it on top of the placeholder, as you do in Premiere Elements' similar Video Collage feature.

FastFlick The FastFlick app is much simpler to use: You just pick a template, add your media, and let the program do the rest. It's perhaps a bit too simple, producing cookie-cutter results. You can, however, transfer its creations to the full VideoStudio editor for customization. It's a separate program included with VideoStudio for simple, quick-and-dirty digital movie creation. You can start FastFlick from its own desktop icon or from the full program's Tools menu.

You can create your own templates, as well. One template applied the nifty effect of turning my video back and forth from a sketch look. This feature is only partially touch-friendly, and it didn't let me use the on-screen keyboard in my testing. Text tiles and background music are customizable, though if the template you choose doesn't already have titles, you can't add them. I like the slider that adjusts the relative volumes of the clip audio and background music. When you're done, a button optionally takes you to the full editor, or you can produce your video in a variety of standard file formats or share it online.